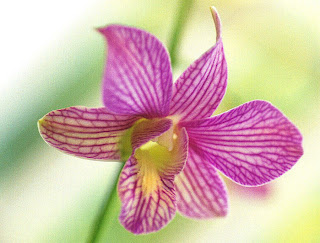 ﻿
Over 30 years ago, I started growing orchids, and I remember growing a Dendrobium phalaenopsis hybrid called 'Hickam Deb' with its massive round burgundy-Merlot flowers. It was a slow-growing plant by today's standards, and had a fairly short flower life. It needed a rather strict dry rest in the winter, and the plants were never robust, either. The modern hybridizing is much better, and far different than the hybrids of a lifetime ago. The newer hybrids are faster growing, more diverse in size and shape than anything seen before, as well as easier to grow. There is actually a species  Dendrobium phalenopsis, also known as D. bigibbum and is one of those curious plants with two genera names in its binomial e.g. Oncidium phalaenopsis, Miltonia phalaenopsis, and so on.

This group of species and its hybrids have diverged markedly from the ancestral plants of the 1960s. There are numerous cross-group plants using other sections in the genus, with curious group names such as Den-Phal, inter-Den-Phal, Antelope-Den-Phal, and on and on. The range of hybrids is astounding, but fortunately they all require about the same conditions: very bright light, plenty of water and fertilizer in active growth, and a bit of attention to pest control while in bud or spike. It is wise to keep these plants almost pot-bound, and in as much sunlight as they can stand. Many growers use a high-phosphorous liquid fertilizer toward the end of the growing  season to boost flowering, and the empirical evidence supports this idea. I would not suggest that phosphorous "makes" flowers or spurs a plant to produce flowers when it is not ready to, but I would concur that extra phosphorous ( the middle number in the 3-number series on a fertilizer label) combined with a reduction of nitrogen would likely produce more flowers than a regular, balanced number fertilizer.

Many of the new Asian hybrids have Art Deco colors or some unusual flares and even 2-tone striping in the flowers. Larger orchid sales have a wide range of colors and sizes available. Be aware that many overseas growers have nearly perfect growing conditions, and the plant you buy may need some extra care to make sure it acclimates to your conditions. Some growers pot their plants in pure sphagnum moss, which may be too wet for humid rainy conditions, so a bit of drying out and repotting may be needed.

One of the most important things to remember about repotting these plants is to use a well-drained mix that still holds water. A Cattleya mix with a bit of extra sphagnum moss should do the job. Repot plants when new canes are produced. The plants are prodigious feeders, and in very strong light they can be fertilized every few days and watered daily. Here in South Florida some of the better growers grow their plants in all-day sunlight on pool decks, with Dynamite or a similar fertilizer mixed into the potting mix, in addition to weekly liquid fertilizing.

If you pay a bit of attention the plants' needs, especially snail and pest control during summer months, and mites in winter months. this group is quite rewarding, and put on an eye popping show of flowers that last for months. You can get a lot of firepower In a small area with this group, so look at an old friend  once more.