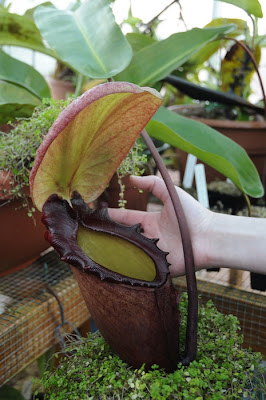 Monster Malaysian Monkey-Eating Vine !
﻿
﻿
Well..... not really. ﻿I am sure that there were headlines to this effect perhaps a century ago in Victorian England. The truth is, as is so often the case, much more tame. The Asian Pitcher vines of the genus Nepenthes have fired up plant growers' imaginations for 200 years. Most of the species are curious or odd, but some are downright impressive. One of the newest species is named after famed explorer and celebrity Sir David Attenborough, and boasts an amazing pitcher large enough to "eat" a rat or mouse. In several cases, vertebrate bones have been found in the pitchers of Nepenthes vines, but likely the bones belonged to a small rodent, not anything as large as a monkey. One report long ago stated that tarsier bones had been found in a pitcher, which was promptly translated to "primate", and thence onward to "monkey".

The pitchers passively trap insects, frogs, and anything else that drowns in the liquid p…
Post a Comment
Read more
August 26, 2011 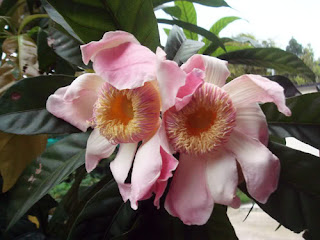 
﻿I read so many blogs about Impatiens and Wax Begonias and annual plants, but we live in a great spot in the country where we can grow something really DIFFERENT. I see thousands of unimaginative houses with equally unimaginative landscapes, yet once in a while I see some really cool and unusual tree on someone's property. I want to knock on the owner's door and ask a few questions, including "what inspiration made you plant THAT ? And where did you get it ? Thanks for doing something different. !"
One such tree is Gustavia, rare in most any place, but occasionally available at plant and tree sales. Seed has become available from Asian and  South American sources. Until recently, the rare-plant people said it was hard to grow, and that it needed to be planted in a swamp. I know the tree comes from flooded areas in South America, but the tree can be grown successfully as a "regular" landscape plant. There are sizabl…
Post a Comment
Read more
August 23, 2011 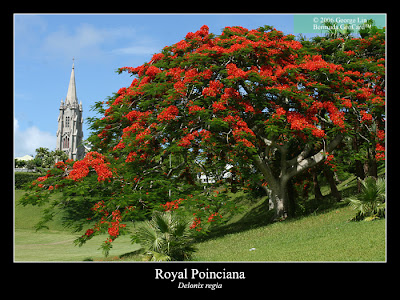 From WAY Over There- Madagascar Trees- Royal Poinciana


﻿﻿
﻿﻿﻿ ﻿ One of the grandest flowering trees in existence, the Royal Poinciana is a statement in the landscape no matter where it is grown. Now fairly rare in its native country, it is possible that ﻿there are more Poincianas in the USA and some subtropical countries than in Madagascar. I saw the first Royal Flamboyant 28 years ago in Fort Myers, Florida as a horticulture student. It was hard to stop staring at its mantle of brilliant flowers. I had no idea then that different varieties existed, much less  varieties of varieties. There are several different color forms of the species regia.  I have seen 8 or 10 distinct color variants in Miami, most notably the 3 different yellow varieties, in addition to the 'Smathers Orange' just across the road from Pinecrest gardens, and a brilliant vermilion variety.
This tree grows naturally to grand dimensions, but can be grown in a fairly compact area if it gets trimmed back every fe…
Post a Comment
Read more
August 19, 2011 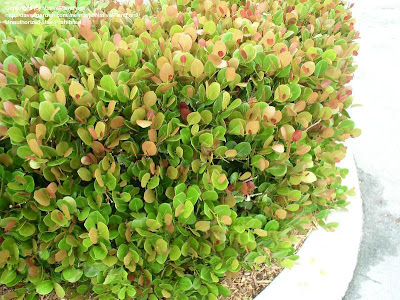 
It is a perennial question : "what kind of hedge should I install to block out my neighbors?"﻿ There is a surprising number of answers, but the most strenuous one is " NOT FICUS". Planting a Ficus hedge is a grand example of short-term returns and long-term headaches. I marvel at people who believe their landscaper when he says he can install a hedge for $ 5 per linear foot, it will grow to 6 or 8 feet tall quickly, and your screening problems are over. It seems that the homeowners feel the hedge will stop growing at a certain height on command. What the owners don't realize is that a Ficus hedge will cost them a great deal of money to keep it trimmed, the roots will out-compete even turfgrass for fertilizer , and the plants suck up egregious amounts of water. The hedge will be cheap at installation time, but will cost thousands of dollars over the next decade for trimming and disposal.
What if, on the other hand, we had…
Post a Comment
Read more
August 16, 2011 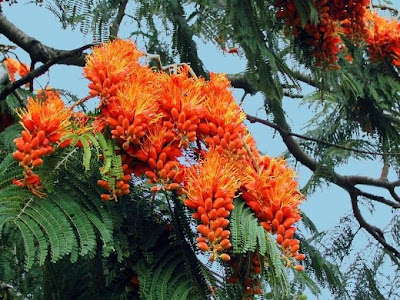 From WAY Over There- Madagascar Trees - Colvillea
﻿
﻿

This is the first installment of a short series on trees from one of the most interesting countries in the world- Madagascar. There are hundreds, if not thousands of interesting plants in this country-continent. A hefty series of textbooks could be written on just the tree and palm flora of the country, much less the extraordinary fauna, insects and smaller plants. This would be one of the areas so often called The Land That Time Forgot. This blog, unlike most of my blogs, is dedicated to just one extraordinary species, the Colville's Glory Tree. It has a lot to say in its favor, and a few things to watch out for, too.
There is only species in the genus, C. racemosa, which in taxonomy circles is called a monotypic genus. The tree can be grown any place where a Royal Poinciana could be grown, and they bear a resemblance to each other (both are from Madagascar). Whereas Poinciana tree have a much more lateral aspect to their habit,…
Post a Comment
Read more
August 12, 2011 
If you have never grown and flowered ﻿a Plumeria, you are missing some of the greatest fragrances and colors in the flowering tree world. If you are a Northerner in addition to being new to this genus, you're in for a double treat, since no northern tree does anything like a Plumeria. Most of the species in this genus have brilliant flowers on hefty, statuesque trees. The major complaint people have is that the trees go leafless at some part of the short days of the year. Some Floridians call this period "winter". I call it the best time of year for people to tend their gardens. In any language, this is a great group of plants, with a lot of advantages and a few quirks, as with so many plants. Plus, there are numerous websites and societies to help with your new plants.
Plumeria species are succulents, mostly from very dry climates in Central America. While they grow quite well as "regular" landscape plants in South Florida and southern Cal…
Post a Comment
Read more
August 09, 2011 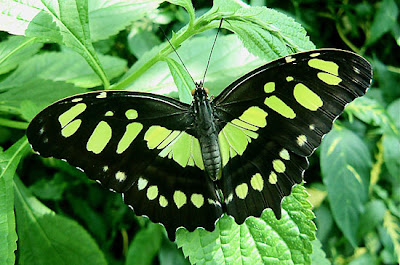 Butterfly Gardens for Beginners:﻿ Some Thoughts from a Beginner

Butterfly Gardening is one of the most popular garden topics right now. As a horticulturist at a public garden, it is almost expected that we would put in a butterfly section, and many homeowners﻿ have done so as well. As a beginner at building such gardens, but as a lifelong gardener, I was curious about the techniques and travails of building a garden to attract a specific sector of wildlife. Herewith are some observations about making a butterfly garden in the subtropics.
The first observation I made is that many butterflies like to feed on weeds, such as Spanish Needles ( Bidens). The second observation is that butterflies have not read any books about what they are supposed  to feed on, and will feed on anything they happen to like. In other words, buying a book on attracting butterflies will not guarantee success, but it helps to do so. Be observant and see what butterflies feed on in your garden. The third observatio…
Post a Comment
Read more
August 05, 2011 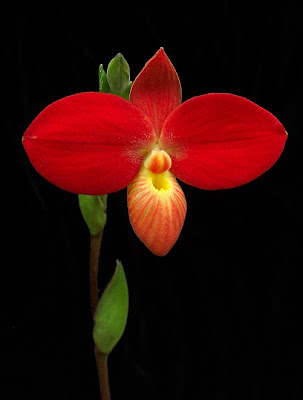 This is the last installment of the tropical Ladyslipper orchid series, outlining Phragmipediums,  the New World version of the genus Paphiopedilum. ﻿These plants have many similar characters to their Old World brethren, but with some unique differences. Many of the species in this genus come from a fairly small area of South America, mostly in wet areas of Peru, Ecuador, and Colombia. Some species come from moss-covered rocks near waterfalls, where they are bathed in rainwater mist, while enjoying a brisk breeze at a temperature that is mostly constant around the year, roughly 80 F or a bit less. ( How difficult could it be to grow those species ? ) Curiously, "phrags" are considered moderately easy to grow, once the conditions are met. The conditions in which these species grow best are well-aerated mixes containing an inert spongy rock such as diatomaceous earth or pumice, plus sphagnum moss, plus…
Post a Comment
Read more
August 02, 2011 It Had to Start Somewhere- Paphiopedilum Species: The Checkerboard Group

This is the last of the three major groups in this genus to write about, and for lack of a better﻿ term, we'll call it the checkerboard group. This is a rare instance in which some of these species are gorgeous foliage plants, and the flowers are an added bonus. It is this group of species which produced the famous "Maudiae" line of breeding which so many people have grown over the last century or so.
﻿﻿
A great many of the species in this group are shade-and heat-loving﻿﻿ plants, and tend to be less well suited for outdoor culture. The plants are fairly petite, rarely growing over eight inches tall, with flower stems  12-18 inches tall. There are, as with much of this genus, inter-section hybrids which have excellent qualities of long lasting flowers, repeat flowering on one stem, and dazzling colors. They can be grown very successfully under lights or in windowsills even in cold climates.
﻿
﻿
﻿
﻿﻿
…
Post a Comment
Read more
More posts